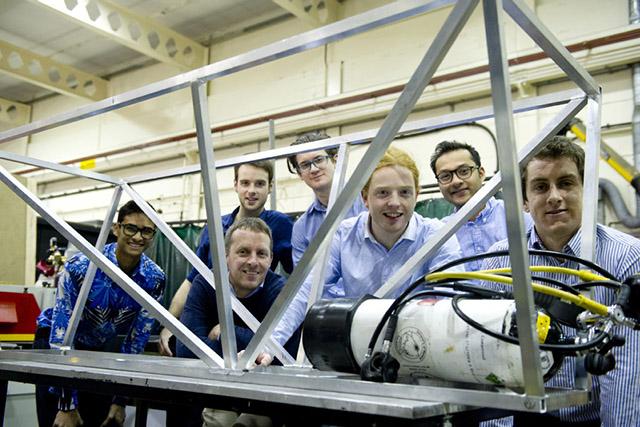 Engineering students at the University of Warwick are building a human-powered submarine that will compete in a pan-European competition.

The team, which includes students of various engineering disciplines, uses advanced manufacturing methods, such as advanced prototyping and 3D printing, to optimise the design.

“There are a multitude of challenges we face in the design, manufacture and testing of the submarine on top of organisational aspects such as sponsorship,” said Cameron Blackwell, one of the team members.

“We hope our entry emerges victorious in all categories but in order to do any of this we need help and are searching for a potential business to sponsor us. Of course, the biggest challenge is to produce a submarine that has both speed and agility,” he said.

In July this year, the team’s creation will be tested during the four-day European International Submarine Race (eISR) at Gosport’s Ocean Basin, the biggest covered water space in Europe. During the four-day marathon, the team will fight against its competitors from across the whole world in various disciplines including a U turn and slalom competition to assess speed, design and performance.

The competition will also include a twenty five metre race where the Warwick team is aiming to beat the speed record of 8.09mph; currently held by a team from Montreal.

“This group project gets students from the various engineering disciplines working together much as they would need to in real industries and businesses after graduation,” said the team's supervisor Ian Tuersley.

“These ‘design and build’ competitions provide an additional incentive to produce a functional, finished product within set constraints and to an enforced deadline. Warwick has a proven history of doing well in similar competitions, and we hope this team will do the same.”